Experience has shown that training and capacity-building for development workers has a critical impact on the pace and direction of development. Building a holistic perspective and shared commitment to gender justice, diversity, peace, democracy and sustainable development among development workers has been identified as a necessary intervention. The need for increased cooperation and solidarity at the South Asian level is also felt and expressed by a large number of NGOs/CSOs.

However, there is a dearth of trainers and resource persons who can provide a holistic perspective on interconnected issues of peace, sustainable development, human rights, women’s rights and justice. Development workers and trainers in NGOs are repeatedly articulating the need for such capacity-building. 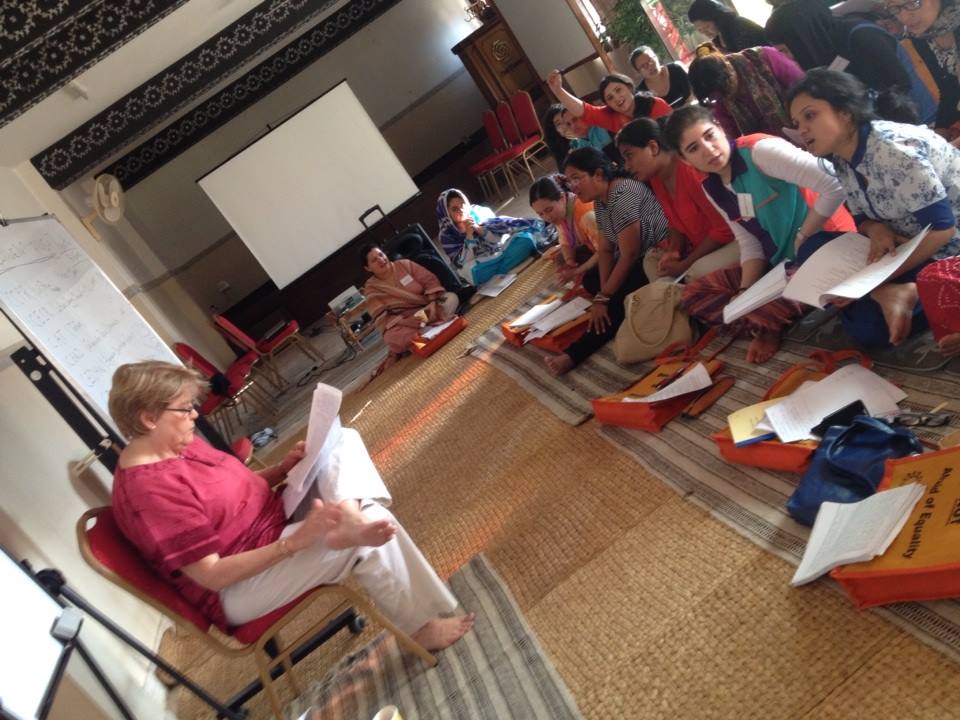 Sangat’s mission therefore has been to (a) equip men and women in the development sector with a larger and critical perspective on issues of sustainable development, gender and so on and (b) to develop and build feminist capacities of a cadre of trainers through ‘training-of- trainers’. This, we feel, will assist NGOs/CSOs analyse their work within the larger frame of the politics of development and thus widen their perspective and skills. So in 1998, when Sangat was conceptualised, it was proposed that the network would undertake the following activities:

Sangat’s activities do not just fall within the above-mentioned mandate, as it were. We try to connect with many other issues that are connected with our work. Since Sangat’s emphasis has always been on collective action, we like to work in collaboration with our partners in the region. Our area of work has been South Asia with most activities and partners in Bangladesh, India, Nepal, Pakistan and Sri Lanka. We have also included participants from Afghanistan, Burma, and collaborated on some issues and activities with CSOs in other parts of Asia and the world such as Sudan, Turkey and so on.

Given below are the highlights of the main activities organised and/or supported by Sangat:

These courses help the participants develop a strong gender and human rights perspective on major development issues in South Asia, which they take to their organisations. These courses have strengthened South Asian solidarity and networking. The alumnae of these courses have remained in touch with each other and cooperated in many cross-border activities every year.

Sangat organises 15 day, Two – Country local language courses based on the strong strong demand from activist women who do not know English but are keen to be part of Sangat’s feminist courses. Through these two country courses in local languages, Sangat is able to cater to a much larger number of activists and reach grassroot level activists and organizations. These courses have strengthened people to people networking and cooperation between NGOs across national borders.

For more information on upcoming courses, please write to us at sangat@sangatsouthasia.org

Sangat has organised, supported and participated in a large number of South Asian workshops and conferences aimed at developing a shared perspective on major issues related to sustainable livelihoods, gender equality, democracy, human rights etc. All of them were done in collaboration with one or two partners. Some of the recent workshops/conferences are mentioned below:

Sangat has supported several national workshops and trainings in different countries by identifying resource persons and providing teaching materials. To mention just a few, Sangat supported Shtrii Shakti in Nepal to organise a series of training-of-trainers; Aurat Foundation and ROZAN in Pakistan; colleges in Chandigarh, a convention on Gram Swaraj in West Bengal, a Muslim women’s reflection retreat organised by SAHRWARU, Ahmedabad, a large gathering of peasant women by DISHA, Saharanpur in India. Sangat also organised several public lectures in India by several national and international scholars and activists.

Besides, Sangat organises lectures on various themes that interest women activists such as on Buddhism and feminist activism, the Sacred and the Secular and so on.

Sangat has supported many campaigns/processes in the region over the last several years. Some of those are listed below:

The South Asian Women’s Day is a creation of the Sangat network and one of its biggest celebrations to engage women with and mark their role in peace, justice, human rights and democracy. The day has been celebrated since 2002.

Like for most of its campaigns, Sangat works with various other civil society organisations in India and the South Asian region for the South Asian Women’s Day. The significance of the day in India could not be emphasized more in the aftermath of the increasing violence in South Asia in the last few years.

Men and women collected in many cities and towns of South Asia (India, Pakistan, Afghanistan, Bangladesh, Nepal and Sri Lanka) to light candles at the same time in the evening to express solidarity with the people of the region, and demand democracy and peace.

To enhance friendship between the neighbours – India and Pakistan – Sangat regularly conducts, organises and supports a variety of programmes in the form of seminars, lectures, cultural events and so on.

As the war-mongering in India and Pakistan raised its pitch, after the brutal attacks in Mumbai, Sangat co-organised many events to counter it, such as a joint signature campaign between the two countries. It also facilitated the visit of a 24-member strong Pakistani peace delegation to India in an effort to defuse tensions between the two nuclear armed Asian rivals. The delegation comprised human rights activists, former diplomats, politicians, artists and senior journalists. The peace delegation held meetings with representatives of Indian civil societies, politicians, lawyers and journalists to ease tensions and to seek solutions to all outstanding issues through dialogue.

Collaboration with and support to regional and global networks

In 2003-2006, Sangat collaborated with the global project 1000 Women for the Nobel Peace Prize 2005. Kamla Bhasin was invited to be the South Asia Coordinator of this fascinating project. Sangat helped in identifying 157 South Asian women. This was by far the largest number for any region. Sangat got detailed profiles of 157 women written and their photographs taken for a 2,200 page book titled 1000 Peacewomen Across the Globe. The book contains profiles of all 1000 women nominated the world over.

Sangat also produced a powerful 60-minute long film entitled Redefining Peace: Women Lead the Way and two other films. Although these 1000 women were not given the Nobel Prize, the Project achieved its objective of making women’s peace work visible and recognised. It popularised a comprehensive definition of peace, initiating research on peace women and generally strengthening the global peace movement. Kamla Bhasin is presently the global Co-Chair of Peace Women Across the Globe and Sangat continues to be an active part of this global initiative.

Sangat works closely with SAHR in order to hold public meetings and conventions with human rights and peace activists from South Asia.

People’s SAARC is a large South Asian network of CSOs promoting South Asian solidarity for a pro-people agenda. Sangat collaborates closely with this network and Kamla Bhasin is one of the Steering Committee members.